Thoughtful and thought-provoking piece on class differences in academia. I found a lot to identify with in this essay (although, unlike the author, I became bogged down with debt) and think we need more conversations like this at university.

A while ago I wrote about the fieldnote template I used in MS Word for my PhD research. Now that I’m starting some new projects it’s the perfect time to try Evernote for ethnographic fieldnotes.

I have used Evernote for a while (mainly for storing annotations and web clippings) but I have to admit it wasn’t the first thing that sprang to my mind when I thought of switching away from MS Word for fieldnotes. I asked ethnographic researchers on Twitter to share what they used to take electronic fieldnotes, and Kelly Dombroski was the first to suggest I take a look at the possibilities Evernote provides for writing and organising fieldnotes. A quick Google search led me to a couple of useful blog posts by reseachers who use Evernote this way, including one by David Keyes on Evernote as Field Notebook where he talks about how he came to use Evernote for fieldwork and data analysis. Over on the Wenner-Gren Blog, Danielle Carr discusses how she became a “reluctant convert” to Evernote and outlines some advantages and disadvantages of using it. Taking a slightly different approach, Tim Sensing uses Evernote for a student ethnography assignment, something also suggested on a web page I found for the course Web 2.0 Foundations: A Networked Research Course describing how to take fieldnotes and write them up in Evernote.

END_OF_DOCUMENT_TOKEN_TO_BE_REPLACED

Following on from my post last year, here is a list of theses (Masters and PhD) published in anthropology departments in Aotearoa New Zealand in 2014. My list includes all major universities except for Auckland University of Technology, not because AUT doesn’t offer anthropology (it does, in the School of Social Sciences and Public Policy) but because it takes an interdisciplinary approach and I couldn’t tell which of its theses were more or less ‘anthropological.’

I compiled this list by searching the New Zealand National Union Catalogue of the National Library of New Zealand, which holds masters theses and doctoral dissertations awarded by New Zealand universities. I also searched individual university library catalogues and online research commons. I used the keywords “anthropology” and “thesis” in my search. Some catalogues were more difficult to navigate than others and I had restricted access to several resources, so my apologies to those whose names I have missed. Please comment below if you have a thesis to add to this list or correction I need to make.

END_OF_DOCUMENT_TOKEN_TO_BE_REPLACED

This is the time of year when our Masters students are starting to think about how they’re going to write their theses. It can be a daunting concept! Having essentially learnt what ‘not to do’ when writing my own MA thesis, I decided early on in my PhD to write and actively work with a table of contents. The idea for this came from several excellent books I read on writing, including Harry Wolcott’s Writing Up Qualitative Research, Joan Bolker’s Writing Your Dissertation in 15 Minutes a Day, and Laurel Richardon’s Writing: A Method of Inquiry.

To begin with, I spent one pomodoro (a 25-minute dedicated writing block) working on my table of contents every month. I would send it to my supervisors as a way for them to see how my work was progressing. Doing a table of contents helped me keep the big picture in mind and be a more productive, focused writer.

END_OF_DOCUMENT_TOKEN_TO_BE_REPLACED

I can’t remember when I first came across Robert Brown’s 1994/95 article Write Right First Time, but it radically improved the way I approach writing. In this article Brown provides eight questions, or writing prompts, for academics to use before they start writing. His goal is for academics to take more time at the start of the writing process to think carefully about what they want to say, so that they will become better writers and more likely to produce high quality work that is “right the first time.”  Although he intended the questions to be used as part of an action learning group (where a small group of people get together and peer review one another’s work), I find them just as effective in my own independent writing process.

The programme is now out for this weekend’s conference, Competing Responsibilities: The politics and ethics of responsibility in contemporary life. I’m excited to hear keynote speakers Nikolas Rose and Cris Shore, of course, but I am also looking forward to hearing how other presenters are rethinking responsibility and responsibilization as theoretical and analytical concepts. SavageMinds.org recently featured an interview with conference organisers Catherine Trundle and Susanna Trnka which nicely introduces the conference theme.

I was inspired by the conference theme and have developed the paper below (based on my PhD research) to focus on how grassroots organisations become responsibilized in the absence of effective state interventions in urban poor areas.

ABSTRACT:
In 1991 the Government of India implemented widespread economic liberalisation policies which, as well as contributing to India’s recent economic rise to global significance, had important and uneven effects on various social groups within India. Despite official reports of declining poverty in India, neoliberal ideas and policies have not improved the lives of those living in poverty – many of whom are Muslim – in bastis in Howrah, West Bengal. This paper argues that Howrah’s bastis are “forgotten places,” historically and politically constructed enclaves that are neglected, but nevertheless deeply inhabited, by the state. In these bastis, services that are the responsibility of the state – such as access to education – are not adequately provided for, leaving a gap that NGOs and grassroots organisations try to fill. This paper provides an ethnographic account of what happens in such “forgotten places” by describing the efforts of Howrah Pilot Project, an organisation that seeks to address this gap by running a grassroots-level, nonformal school in one of Howrah’s bastis. Processes of ‘active forgetting’ serve to responsibilize such organisations, but their practices need to be augmented by a responsive state in order to achieve meaningful, long-term, beneficial change.

A month or so ago I posted some thoughts about what it’s really like to be an anthropologist. Not long after that I was asked to talk to a group of Y12 students (high school students in their penultimate year who had come to Victoria University to learn about future study options) about doing anthropological fieldwork. That talk did a much better job of capturing what for me is one of the most rewarding (and challenging) parts of being an anthropologist: doing fieldwork.

I studied Hip-Hop Culture in Aotearoa for my Masters degree in social anthropology, which involved doing fieldwork ‘at home.’ I had long been a fan of Aotearoa Hip-Hop (I used to co-host the Hip-Hop show on Massey University’s student radio station Radio Control) and became interested in understanding how and why Hip-Hop in New Zealand was different to Hip-Hop overseas, particularly the United States. My thesis was based on three years of ethnographic fieldwork (2000-2002) where I explored what Hip-Hop meant to those actively involved in producing and performing Hip-Hop in Aotearoa.

My fieldwork involved a lot of listening and observation. I went to events (b-boy and MC battles, graffiti showcases, gigs, Aotearoa Hip-Hop Summits), used a technique called participant-observation (sometimes known as ‘deep hanging out’ with a purpose) where I would participate in as well as observe what was going on, took fieldnotes and photos, interviewed members of the Hip-Hop community, and tried to immerse myself in all things Hip-Hop.

People often smile when I tell them my fieldwork involved going to gigs or watching spraycans while people created graffiti art (making jokes like “I bet that was hard work”). However, this kind of fieldwork is not as easy as it sounds. Daniel Simons’ video The Monkey Business Illusion is a great example of how we often miss a lot of what happens around us:
END_OF_DOCUMENT_TOKEN_TO_BE_REPLACED

Recently I’ve been working with colleagues at Massey University in Palmerston North and here at Victoria University of Wellington to screen the acclaimed documentary film series Women War & Peace in Wellington. VUW’s Cultural Anthropology Programme and VicIDS are pleased to present the award-winning film Pray the Devil Back to Hell, which will be followed by a discussion with invited guests. All welcome!

This film tells the astonishing story of the Liberian women who took on the warlords and regime of dictator Charles Taylor in the midst of a brutal civil war, and won a once unimaginable peace for their shattered country in 2003. As the rebel noose tightened around the capital city of Monrovia, thousands of women – ordinary mothers, grandmothers, aunts and daughters, both Christian and Muslim – formed a thin but unshakeable line between the opposing forces. Armed only with white t-shirts and the courage of their convictions, they literally faced down the killers who had turned Liberia into hell on earth. In one memorable scene, the women barricaded the site of stalled peace talks in Ghana and refused to move until a deal was done. Their demonstrates culminated in Taylor’s exile and the rise of Africa’s first female head of state, Ellen Johnson Sirleaf. Inspiring and uplifting, Pray the Devil Back to Hell is a compelling example of how grassroots activism can alter the history of nations. 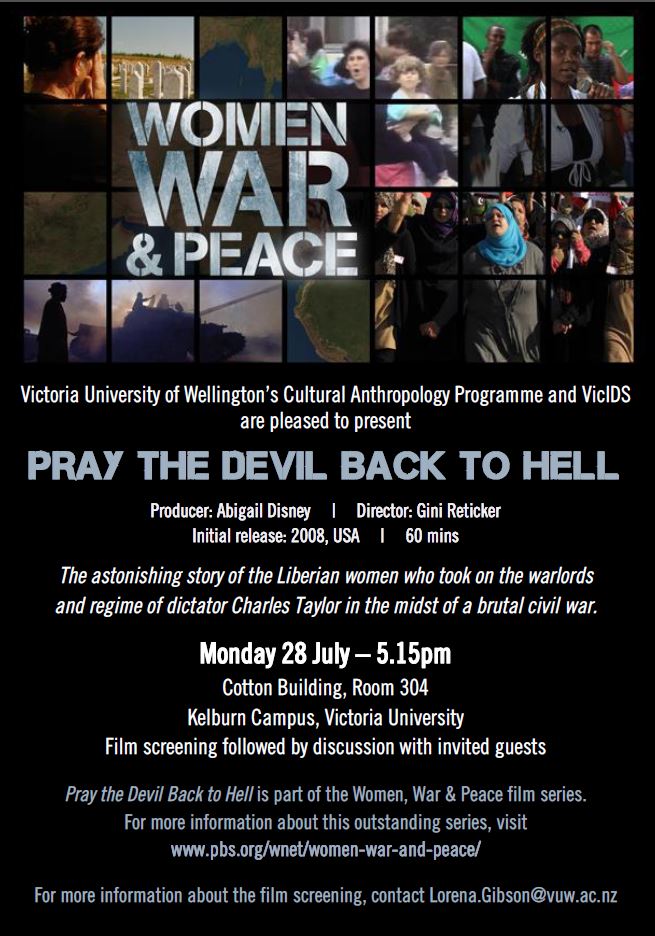 Great post – wish I’d had these tips when I was working on my thesis.

In a recent lecture at ANU, the esteemed research education expert Dr Margaret Kiley claimed that if we set out to design the Australian PhD from scratch we wouldn’t start from here. The PhD assessment (in most cases, a long form thesis), she argued, does not not necessarily develop the full panoply of skills we expect in a working researcher, inside or outside of academia.

One of the clever students in the audience absorbed the implications of Margaret’s lecture straight away and asked:

If that’s the case, what should I spend my time on? At the moment I spend most of my time reading and writing because that’s what I’m being assessed on. Should I be doing more?

Joyce Seitzinger and I being silly in a photobooth for the Canberra Tourist board.

This is the time of year in New Zealand when potential university students start thinking about future career options and what they’d like to study. Last week I received this email from Hannah asking what it’s like to be an anthropologist:

I am at that point in my life where I need to decide what it is I want to do with my life career wise and I have a shortlist of things I love to do and would love to do as a career, Anthropologist is one of those things.
I have  done a bit of research into it but what I would really like is to know what it is really like to be an Anthropologist on a day to day basis and in the long run?
I would like to know this so I can decided if this is what I really want to do so I can choose my study for next year at Uni.
I would greatly appreciate any information you can give me on the life of an Anthropologist.

Hannah said the replies I sent her were helpful and gave her a lot of food for thought in terms of her future career. I asked her if I could share them on my blog in case other students might also find them helpful. She agreed, so there they are!
END_OF_DOCUMENT_TOKEN_TO_BE_REPLACED